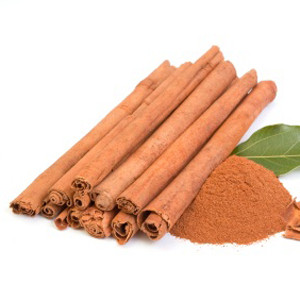 Can there be a smell more imbued with the sense of home? Cinnamon rolls, Christmas time, hot apple pie, for Gods sake. Cinnamon may be one of the most American of all aromatics, at least to Americans!

But Cinnamon swings in every way: olfaction and gustation; sweet and savory; comfort and adventure.....Cinnamon’s hot sweet spiciness warms and gladdens the gray days of winter. Cinnamon gives color to a black and white world--so she is really one of the most feminine of all spices.

Naturally, when people traveled by ocean, the great trade routes stopped here in the Arabian Peninsula; then the center of the ocean going world. Spices came from the Far East across the Indian Ocean and up to Europe via the Red Sea and Alexandria. The local Arabs were the middlemen for this trade and of course, not being fools, invented fabulous stories about the origins of cinnamon; the terrible dangers that awaited those who dared to harvest it, the extreme bravery and cunning needed to acquire it and therefore, the high cost that was perfectly reasonable, given the circumstances.

It was said that cinnamon could be found making up the nests of huge and vicious cinnamon birds, who harvested the cinnamon from an unknown place, guarding their cliff-hanging cinnamon nests with eagle eyes and malevolent temperaments. These birds could easily tear men apart with their razor-like talons and beaks. The only way to lay hands on the cinnamon was to cut apart an ox, leaving the body in plain sight, and stealthily hide and wait for the carnivorous birds to fly down to claim it, taking it back to the nest, where the great weight of the ox parts broke apart the nest, causing the cinnamon to drop to the base of the cliff, where it could quickly be collected before the harvesters ran for their lives.

You can read about this in Herodotus’ Stories. He also suspected cinnamon grew in Arabia, along with frankincense and myrrh and was guarded by fearsome flying snakes. (These are possibly Omani carpet vipers, who live among the frankincense trees, and while they don’t actually fly, they can leap out of the trees.....)

Cinnamon is mentioned in all the old books, including the famous passage of the Song of Solomon “.....a spring shut up, a fountain sealed. Your plants are an orchard of pomegranates, with pleasant fruits; camphire, with spikenard, Spikenard and saffron; calamus and cinnamon, with all trees of frankincense; myrrh and aloes, with all the chief spices: fountain of gardens, a well of living waters, and streams from Lebanon.”

And Psalms 7:17 “I have perfumed my bed with myrrh, aloes and cinnamon.”

The cinnamon trade to Europe was controlled by the Arabs, then the Portuguese, then the Dutch and finally, as the trade was declining in importance, the British. Like the drug trade today, it was extremely lucrative.

Cinnamon’s main home is the Indian Ocean--Sri Lanka, Seychelles, Madagascar and the like. It can grow in any tropical climate, but is happiest on Indian Ocean islands. Cassia is from China, and Southeast Asia (Indonesia, Vietnam, etc) has several species of its own.

France is a huge importer as is the US and Mexico. Let’s reflect for a minute on Mexico, the land that gave us both chocolate and vanilla. Just think about it.

Cinnamon bark is an expensive essential oil; prices vary of course, throughout the seasons. Cinnamon leaf oil is really cheap but they are nothing alike. Cinnamon bark’s heart is cinnamaldehyde while cinnamon leaf is all about eugenol. Nothing wrong with eugenol, cloves sport it nonstop. And it will do for scenting some things, like soap. But it’s not cinnamon bark. Cinnamon bark is a little sensitizing to skin so her topical uses are limited but she just rocks and rolls with flavor. She is the queen of sweets, along with vanilla, and many cuisines, such as Indian and Middle Eastern, use cinnamon in savory dishes.

Cinnamon trees are harvested after 2-4 years, as a rule and takes place during the rainy season. The outer bark is stripped off and the inner bark is beaten with mallets. It’s quite brutal. The beating loosens the inner bark which is then peeled off in long strips that curl as they dry. Later these quills are cut into 5-10 cm pieces.

Cinnamon oil can be extracted by hydro or steam distillation, or a combination of the two, but the hydrosol needs to go back into the pot, in a form of cohobation, like with rose. Meaning the cinnamon oil comes over in fractions and the hydrosol needs to be run through the still at least twice. Many of the constituents are soluble in water, and very difficult to separate, obviously, so this is why the hydrosol must be further distilled

“Ceylon” is a pale to dark yellow, or brownish yellow, somewhat oily liquid of extremely powerful, diffusive, warm-spicy, sweet and tenacious odor. The undertone and dryout notes reveal a persistant dryness, which is very unique in combination with the distinct sweetness. Chararcteristic is a dry powdery-dusty, but warm, uniform and lasting dry-out note. In the very first topnote, on may find a certain fruity-freshness, similar to the sweet candy-like freshness in a good clove bud oil.

In perfumery, the oil blends well with oriental-woody notes, and the combination with frankincense is known and often utilized.

“Cinnamon bark is regarded as one of the strongest antibacterial agents known. It is useful for treating viral infections and contagious diseases.

Cinnamon bark oil as an excellent gastrointestinal stimulant. It calms spasms of the digestive tract, and relieves conditions such as dyspepsia, colitis, flatulence, diarrhea, nausea and vomiting.

Both cinnamon bark and leaf oils are very warming; therefore they can be used to relieve aches and chills in the early stages of colds and flu, and the feeling debility that remains after the initial stages of a fever.

Cinnamon oil is a dermal irritant. Never use undiluted on the skin.

For more on Cinnamon, please see

The Complete Guide to Aromatherapy by Salvatore Battaglia.

THE CINNAMON PEELER  by Michael Ondaatje

If I were a cinnamon peeler
I would ride your bed
And leave the yellow bark dust
On your pillow.

Your breasts and shoulders would reek
You could never walk through markets
without the profession of my fingers
floating over you. The blind would
stumble certain of whom they approached
though you might bathe
under rain gutters, monsoon.

Here on the upper thigh
at this smooth pasture
neighbour to you hair
or the crease
that cuts your back. This ankle.
You will be known among strangers
as the cinnamon peeler's wife.

I could hardly glance at you
before marriage
never touch you
--your keen nosed mother, your rough brothers.
I buried my hands
in saffron, disguised them
over smoking tar,
helped the honey gatherers...

When we swam once
I touched you in the water
and our bodies remained free,
you could hold me and be blind of smell.
you climbed the bank and said

this is how you touch other women
the grass cutter's wife, the lime burner's daughter.
And you searched your arms
for the missing perfume

what good is it
to be the lime burner's daughter
left with no trace
as if not spoken to in the act of love
as if wounded without the pleasure of a scar.

You touched
your belly to my hands
in the dry air and said
I am the cinnamon
Peeler's wife. Smell me.

Safety Warning
As with most essential oils, dilute before using on skin. Perform a patch test before use if essential oil sensitivity is suspected. Do not take essential oils internally. Do not use on children or pets. Seek advice from a trained aromatherapist before using on people with compromised immune systems. Keep away from eyes and mucus membranes.
Enfleurage makes no medical claims relating to any products, essential oils or otherwise, on our website or through social media. We are an essential oil company, not doctors, The FDA has not evaluated the statements on this website. We present our information in order to educate our customers on traditional and general uses of essential oils; in no way do we diagnose, cure, treat, or prevent any disease or condition.
You the customer are responsible for understanding the safe use of any and all of our products, including essential oils, and use them accordingly.

This product hasn't received any reviews yet. Be the first to review this product!